Calycanthus, commonly known as sweetshrub, sweet bubby or simply calycanthus, is a favorite of many gardeners. An old-fashioned deciduous shrub, it has been overlooked in recent history but is now making a comeback. It is best known for maroon-red fragrant flowers that open before the leaves emerge in the spring. People in the know plant sweetshrubs around patios or decks where they can enjoy the strawberry-scented aroma.

Sweetshrubs are easily transplanted and can be grown in sun or shade. They can get tall and leggy, growing 6 to 9 feet tall, but pruning after flowering will keep them presentable. They prefer a deep, well-drained loamy soil, though they are tolerant of less-than-perfect soil conditions. Sweetshrubs are tough plants, having few insect or disease problems.

One species of calycanthus is native to North Carolina. The Carolina sweetshrub is commonly found growing as an understory shrub in woodlands and along streams. Sweetshrub can be propagated by seed, but some seedlings may not be true to type and may not have fragrant flowers. Softwood cuttings taken in late spring and summer and treated with a rooting hormone will root readily for most cultivars. 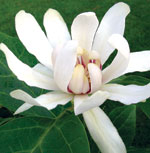 Varieties such as ‘Hartlage Wine’, ‘Athens’ and ‘Michael Lindsey’ are good choices for different flower colors and improved fall color. New hybrids are being developed at NC State University using a combination of different calycanthus species. One of the most promising varieties is a selection called ‘Venus’ produced by crossing three different species. ‘Venus’ produces large, ivory yellow buds on a medium-sized shrub. These buds open into large, upright white flowers that resemble a magnolia bloom. The spring blooms are very fragrant and much showier than the native sweetshrubs. ‘Venus’ is now being propagated by several commercial nurseries and will be available to the gardening public shortly. Hold a spot in your garden for ‘Venus’. It will be worth the wait.