In Search of Lilacs for the South

Many of us remember those fragrant lilacs that grew in the gardens of our parents or grandparents. But we may not remember all the problems that afflicted those plants. The plant that most of us identify as a lilac is the common lilac, Syringa vulgaris. Some varieties of common lilac will do pretty well in the North Carolina mountains. Unfortunately, these lilacs do not like the heat they encounter in the warmer parts of our state and often become afflicted with powdery mildew and borers.

That fact has led horticulturists to look at other species. ‘Miss Kim’, a cultivar of Syringa patula, has been publicized as a lilac that can take hot Southern conditions. Another lilac mentioned as a candidate is Syringa oblata var. dilatata, a variety of the Korean early lilac.

Dick Bir, a retired researcher and N.C. Cooperative Extension specialist, wanted to find lilacs that “look and smell like lilacs.” He conducted trials on lilacs for 20 years at the Mountain Horticultural Crops Research and Extension Center in Fletcher. These long-term observations led Bir to conclude that one of the best groups of lilacs for the piedmont and coastal plain of our state were the cultivars in the Syringa x hyacinthiflora group. This hybrid species is the result of crossing Syringa oblata and Syringa vulgaris. Many garden centers in the state will have some of these cultivars available this spring. As for Syringa oblata, Bir said it flowers too early to consistently avoid frost and freeze damage in the upper piedmont and mountains. For warmer areas, Syringa oblata selections and hybrids deserve a try. 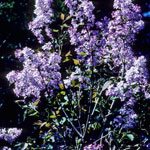 In spite of Raleigh’s hot summers and mild winters, lilac species and cultivars can be observed at the JC Raulston Arboretum (JCRA). Look for many of them in the eastern sections of the JCRA.

For more information on the types of lilacs that do best in your area, contact your county Cooperative Extension agent.